Introducing Crocuta to a male

It was time for Crocuta to no longer be in human company, but be with her own kind. Of all the phases this was the most difficult one for me. How will I know if it will work or not? Wild animals, and actually most animals, cannot really be controlled. I knew there was a slight chance that things just won’t work. They could fight and severely injure each other or fight till death.  But even if things went perfect as we hoped, this was still the end of an era for me. I could no longer interact with her in the way I did for the past two years.

At this stage Crocuta was in a camp by herself, bordering another clan of hyenas. This specific clan and Crocuta had some terrible interactions through the fence. The main part of the fence was electrified, but a small gate in the corner of the camp was not. This gate was used for the moving of animals between camps when necessary. The clan bordering Crocuta got hold of her multiple times through this little gate. They bit of a part of her tail and chunks of her ears. She kept going back to them, but we then added electricity on the small gate as well, which stopped them from getting hold of her. 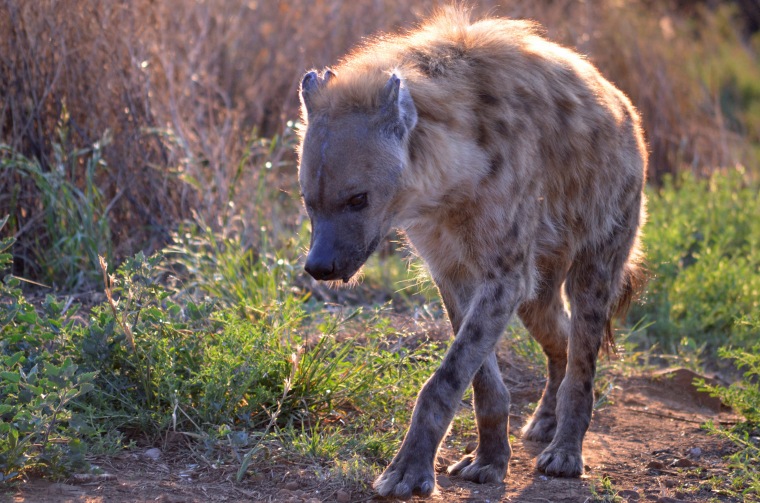 The hyena pictured above, is the male we chose to introduce to Crocuta. We did not want introduce her to a full clan of hyenas, in fear of her being killed by them, especially after her injuries inflicted by the hyenas bordering her camp.

This male was taken from another clan of hyenas on the farm. We moved Crocuta out of her enclosure on the day we moved the male in. She could not be in there while we carried the tranquilized male in, as she could possibly bite him and he won’t be able to defend himself. We moved him in on his own, awoke him and the two of them spent a day in camps bordering each other. We observed their behaviour towards each other, but it was pretty uneventful. After a day, we simply opened the little gate and Crocuta walked in. They gave each other a sniff and basically went on with their own business, as if they were always together. I was maybe expecting a little bit more drama, but nevertheless, I was truly relieved that she could finally be in hyena company. The first time they fed together she proved herself a typical dominant female hyena. She hogged all the food for herself at first and kept chasing him off and their giggles and howls could be heard throughout camp. Animal instinct never cease to amaze me.

If you haven’t read part 1-3 on raising a spotted hyena you can find them here.